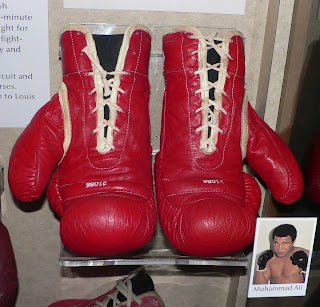 Hard knocks is probably a better teacher than any you'll find in a classroom. How else can you explain the remarkable insight boxers and karate men and MMA guys/girls possess? Despite many of these folks lacking a formal education, they know things about life, success, and overcoming adversity that you just can't find in textbooks, and that rival even the most intelligent minds for great inspiration. Some of my favorite philosophers, in fact, made their living with the ol' fisticuffs. When I get down on myself, like during tax season for example, these Top 15 Fighter Quotes keep me going.

15. Getting hit motivates me. It makes me punish the guy more. A fighter takes a punch, hits back with three punches.

What I get from it: Life deals you blows. You can take them and give up, or you can fight back. I choose to fight back. So should we all.

14. Every fighter has a story that could break your heart. We lose, we get hurt, and everything comes apart. That's when it's so difficult to stay on the straight and narrow.

What I get from it: Champions hurt the same as any of us. The difference is they keep fighting. But so can we.

13. Oh yeah, I mean every fighter has got to be dedicated, learn how to sacrifice, know what the devotion is all about, make sure you're paying attention and studying your art.

What I get from it: If you're not willing to work hard, you won't be able to fight hard.

12. I never tried to be a mercenary or a killer, but a hard working fighter.

What I get from it: Success doesn't have to mean tearing someone else down.

11. I was a tiger, a good fighter, in good shape, but I was always nervous before boxing matches.

What I get from it: Controlled fear is good.

10. I don't mind answering any questions, because I'm not just a fighter. I'm a lot more than that.

What I get from it: We're all deeper than what we do for a living. Our value goes well beyond that.

9. Normally, I could hit hard enough, as anyone who studied my fights might have known. But the impression was that I was essentially a defensive, the very reverse of a killer, the prize fighter who read books, even Shakespeare.

What I get from it: You don't have to fit into any one category, no matter how others think of you.

8. It's the bullies who are afraid, are the ones that do all the fighting. It's not the secure kids that get out there and fight. It's the insecure kids.

What I get from it: It takes greater strength to be in control than out of control.

What I get from it: You don't have to be the best, but if you're not willing to try, then you shouldn't even be in the fight.

6. Within our dreams and aspirations, we find our opportunities.

What I get from it: What drives us can ultimately become our reality, if we truly want it bad enough.

5. Life is a gamble. You can get hurt, but people die in plane crashes, lose their arms and legs in car accidents; people die every day. Same with fighters: some die, some get hurt, some go on. You just don't let yourself believe it will happen to you.

What I get from it: No one's immortal, but what's the point in sitting around worrying about the end when you're not there yet?

4. If you want to learn to swim, jump into the water. On dry land, no frame of mind is ever going to help you.

What I get from it: The greatest teacher is doing.

3. Only a man who knows what it is like to be defeated can reach down to the bottom of his soul and come up with the extra ounce of power it takes to win when the match is even.

What I get from it: Losing teaches us about the sweet thrill of victory.

2. A lot of people give up just before they're about to make it. You know, you never know when that next obstacle is going to be the last one.

What I get from it: This one really hit home the last few days. So much going right with my career right now, but I actually thought about giving up and getting a regular job because it seems like something always goes wrong just when I'm getting ahead. But I've come too far to back out now, and it took Chuck -- the real Chuck -- to convince me.

1. Let me tell you something you already know. The world ain’t all sunshine and rainbows. It’s a very mean and nasty place and I don’t care how tough you are it will beat you to your knees and keep you there permanently if you let it. You, me, or nobody is gonna hit as hard as life. But it ain’t about how hard ya hit. It’s about how hard you can get hit and keep moving forward. How much you can take and keep moving forward. That’s how winning is done! Now if you know what you’re worth then go out and get what you’re worth. But ya gotta be willing to take the hits, and not pointing fingers saying you ain’t where you wanna be because of him, or her, or anybody! Cowards do that and that ain’t you! You’re better than that!

What I get from it: I can't elaborate on that. It's perfect as is.

Great inspiration can come from the unlikeliest of places, and I could spend all day on sites like Quoto just reading what far greater people than myself have said about it. But if it's anything that you can learn from fighters, both in the ring and out, it's that action produces results. Until you're ready to get in the ring and start -- as Duran might say -- throwing three punches back for every jab life floats your way, you'll never reach full potential. So hit back, friends. What are some of your favorite inspirational quotes?
Posted by Aric Mitchell at 1:00 PM